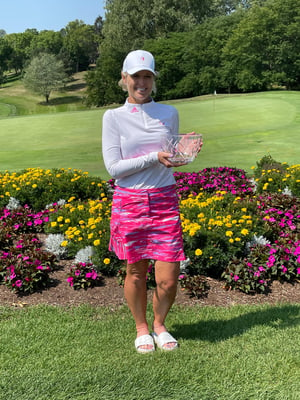 "We were interested in playing more golf," Molly says. "I wanted to accelerate my golf game. So I was probably the driver behind the decision to join."

A Warm Welcome from the Women's League

Molly had played golf recreationally for a decade, joining local leagues and playing while up at their cabin. So when they joined North Oaks Golf Club, Molly immediately joined the women's 9-hole and 18-hole leagues.

"The other ladies in the leagues were kind and helpful," she says. "They took me under their wing and showed me the way. I learned a lot from the ladies I played with."

SEE ALSO: Golf Club Membership: So Much More Than an 18-Hole Course

Molly learned more about the game from her early days at North Oaks. "I came into the spring not having a handicap and not knowing what it was," she says. "I had to be taught along the way. A lot of the ladies were very patient with me understanding the rules. People are serious about the game but out there to have fun. It's a social sport."

A Summer of Improvement

Throughout the summer of 2018, Molly played 4-5 weekly. "It felt like I was golfing every day," she says.

And she registered for every golf event she could — scramble events, the member tournament, club championship, singles match play, doubles match play, traveling league. If it was golf, Molly was there.

As the summer progressed, Molly's game improved. "I got a hole in one on the third day of women's league on Hole No. 5 (163 yards) with a seven iron," she says. Hole No. 5 is now her favorite hole, while Hole No. 2 is the most challenging. "I just can't seem even to get par," she says. "It's always a bogey hole for me."

SEE ALSO: Lag Putting: 4 Tips to Save You Strokes

Molly played more than 70 rounds that season, not including special events, and she won "Most Improved" in her women's league. "I was able to drop my handicap significantly," she says.

She looks forward to what each season will bring. But in the meantime, she has some advice for newcomers hesitant to join a private golf club. "Don't be afraid," she says. "Just sign up for everything, and ask questions. People don't have a hard time sharing their expertise, so take it all in."

Having moved from simply interested to seriously involved, Molly is now in her fifth year of membership and second year as a board member at North Oaks. She continues strengthening her game and the many friendships built along the way.