Lag Putting: 4 Tips to Save You Strokes 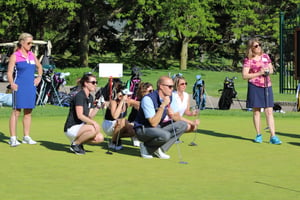 Most great putters sink a lot of putts. They read the break correctly, find the right tempo in their swing, and determine the right speed to hit the golf ball. But many of them have another tool in their putting arsenal — lag putting. Hitting in close on the green is every bit as important as hitting it close on your approach, as both can save you strokes. So, here are some tips for lagging those long putts closer to the hole.

Lag Putting Can Improve Your Score

Not every golfer considers lag putting important because a putt is only successful when the ball goes in the hole, right? Well, not exactly. Good lag putting can improve your score every round you play.

“Lag putting is important because the most important place not to lose shots is on the green,” says Nicholas Sage, first assistant golf professional at North Oaks Golf Club. “The fastest way to gain unnecessary strokes is three-putting. So, if you can guarantee a two-putt at most on any green, your scores will improve dramatically. Many players have close to 33-36 putts a round, often more. If they can cut that down to 28-32 putts per round, it can significantly help not only their scores but their confidence on the green.”

With any putt, the less pressure on it, the better. And since we aren’t expected to make all of our 30-footers, we should relax. But there is still precision involved in a lag putt.

Objective: Get Within Three Feet of the Hole

“The objective is to get yourself in a 3-foot radius of the hole on your first putt to take some stress off the next one,” Sage says. “Obviously, it is nice to make a long one, but the chances of making them every time are low. We should be trying to get it as close as we can. That sounds cliché but being able to lag putt will tremendously help your game.”

Nick offers some “Sage” advice and a few tips on how to improve at lag putting:

Some good drills for practicing lag putting is to simply hit long putts on a practice green. For example, hit putts from one end of the green to the other. The only way to figure out exactly how hard you need to swing the putter for longer putts is to hit those putts. Repetition breeds consistency, and if you repeatedly hit these long putts, you’ll gain an understanding of your own stroke and how to control your distance.

Keep your routine as if you were hitting a 10-foot putt. It is imperative to keep your pre-shot routine for every putt. I have seen many players just walk up and hit it as hard as they can while not focusing on the line.

Accelerate Through the Ball

One of the most important skills in putting, which is true for all length putts, is to accelerate through the golf ball. Any deceleration will cause both speed and line to be off.

Focus on the Speed and Line

Speed is critical because we are trying to get it close to the hole. It is incorrect to consider one or the other as more important. If you have the perfect line but too much speed, you’ll end up missing your putt long on the high side of the hole, often leaving a slippery, downhill putt. Conversely, if you have perfect speed but the wrong line, you can end up missing the hole by five feet or more on long putts. It is important to focus enough on the line in order to get inside the 3-foot circle around the hole.

Never forget that a lag putt can go in the hole. The better you are with all aspects of a putt — read, speed, line, and stroke — the better your chances are at finding the bottom of the cup. And then a great lag putt can really save you strokes.