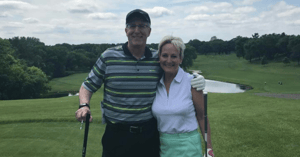 Before this summer, Marci had only played golf a few times. She tried a few lessons, but her results would sound familiar to anybody who has struggled to learn the game.

"I lost so many balls golfing, it was just hilarious. I couldn't connect with the ball," she says. "I would only go out with my son if we were the only ones anywhere to be seen. I wouldn't play with anybody else because I'm not going to hold anybody up who enjoys the game."

That changed this year. Son Charlie, 20, started taking lessons from Grant and she could immediately see the difference in both the approach and the results.

"Grant has the ability to tailor the lesson to the individual," she observes. "Everybody does things a little bit differently physically, but he's not trying to change how you do things physically, rather he works with your traits to get to a new result. It really, really makes a difference in a golf lesson."

Charlie had taken 14 years of lessons at a different club with little success, but he's been thriving under Grant's teaching. And so has his mother.

"I also took golf lessons for one summer, many years ago, though not at North Oaks," she says. "I got more in one hour from Grant than I got in an entire summer of those other lessons."

Yet as much as she credits Grant's teaching and the rounds she's played with Nick, it's hard not to mention the place she truly realized she could have fun out on the golf course.

"The Ladies Clinics are a hoot," she says. "Not only do we learn a lot, but they are just so much fun."

The first Ladies Clinic she attended was for social members, and it was very social. "It was a lot of people like me who've been social members for a long time. I connected with a lot of old neighbors who I don't see very much," she says. "That was awesome."

And she had just as much fun at the Ladies Clinic for golf members.

"It's about wine and golfing," she says. "They have a wine cart out there for people who want to drink and then we work on either chipping or putting or driving or hybrid. Then we go out on the course to try it out and the pros go from person to person to give you some direction."

The instruction helps give her confidence, but she admits the best part is probably after they put their clubs away. "Then a lot of people hang out afterward in the club and get involved in the wine," she jokes. "Doing those clinics got me more involved in the club, that's for sure."

Marci says Grant's approach to teaching golf is just what a newcomer needs. He focuses on how it feels to do something right – and wrong – and learning how to make adjustments.

Working with a virtual beginner, he's been teaching Marci everything, starting with the basics, but adding some of his "feel-oriented" drills once she starts to improve. For example, making adjustments to her set-up depending on the club she's swinging:

"If it's an iron, you're supposed to have it in the middle of your stance, and the driver, you want to line up your front foot with the tee. So, he's teaching me the different stances, and he makes me switch quickly to get used to the adjustment," she explains. "He hands me a driver, then hands me an iron, then hands me a hybrid. Doing it quickly like that really locks it in."

Grant also uses a lot of video, which might not be new to veteran players, but it's been eye-opening for Marci.

"I'll hit some balls and then we'll go back and he'll show me the difference and show me how to adjust where I'm swinging," she says. "That video is really, really helpful to see where I am botching it and then see what it looks like when I do connect right. It's been really, really helpful, and I didn't even know that was a thing. "

And how is it going? Even better than she expected. "My goal when I started was to play 20 rounds," she says, "and I think I'm probably at about 15 right now. I golf every weekend and maybe once during the week, and I really enjoy it."

Most of that golf has been with Nick, which they both really enjoy, plus a few rounds with Charlie. But with her confidence growing lesson by lesson, Marci also feels like she could start playing what she calls "company golf."

"I feel like I can golf well enough where I wouldn't be embarrassed out on the course," she says. "I envision being more social with my golf, but if there were a group of clients or something, I feel like I could participate in a fundraiser. You don't have to be good, you just have to be good enough."

And "good enough" is quite an accomplishment in such a short time – which is a real source of pride.

"I really started from ground zero," she says. "But now I can play North Oaks, I can play some of the other courses around here, and I feel confident about it. I'm just really pleased with where I am at."