Erik credits Grant's analytical approach to his success. "What I like about Grant is that he uses the Trackman technology to really help you understand the mechanics," he explains. "I've got a math degree, so I'm an analytical person, and the numbers really just make sense to me."

Grant quickly diagnosed that Erik's swing angle was wrong. A downward stroke that's ideal for hitting irons was holding him back - literally - with the driver. By swinging down instead of up, he was working against the design of the club, so they reshaped his swing for his driver.

"The way these drivers are built now, you need to get the ball in the air," Erik says. "So he pushed the ball further up in my stance and started me with more weight on the right side of my body and then hitting up on the ball coming to the left."

Despite the data-based diagnosis, Erik credits Grant for keeping his drills simple. "He put the ball basket just outside where my swing path was going to be and then put an alignment stick in it and said don't hit the basket and keep your club underneath the alignment stick," he explains. "The first five swings were really awkward, and then I just started getting in a groove and just hitting. Seeing and feeling where you want that club to be was really helpful."

Grant also urged Erik to use one of his favorite tricks, getting a can of foot powder and spraying it on his clubface to see where he's making contact. "I saw that I was getting a little bit out of sync and hitting it on the heel. That was a good way for me to check every swing, see where and how I was hitting it and get that instant feedback."

By the middle of the season, Erik was seeing results. And more importantly, his friends were noticing.

"Right around the Fourth of July, I was playing in an event with Grant as one our partners and a friend said 'you're 15 yards longer than you were last year, what are you doing?' I just pointed at Grant and smiled." 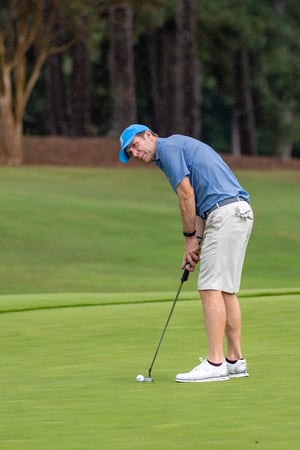 In many ways, Erik likens his swing change (and results) to his favorite baseball team.

"The whole idea of hitting up on a driver is why the Twins have set a record for home runs," he says. "They keep talking about launch angle on the ball, and it's the same principle that the Trackman and the tools that Grant uses that allow you to see what you're doing. In fact, Grant would still like me to be another degree or two even further hitting up on the ball, so there's more room for improvement, despite all the improvement that I've seen."

"The way the golf club technology is designed right now, it pays to have that angle. [Twins outfielder] Max Kepler wasn't a home run hitter, but they taught him to hit up on the ball and all the sudden he's hitting a bunch of home runs. It really is the same thing."

Erik admits it took a lot of hard work to add those yards and shave those strokes, but he plays so often that it's definitely worth it.

"In the middle part of the summer I'm at North Oaks five days a week," he says. "At the end of the workday, my stress reliever is I'll go and hit balls for a half hour and chip and putt, but it's not just the golf. I'll end up seeing five people that I know and we'll have a nice conversation, and that really helps me wind down."

Yet playing with some of the club's lowest-handicap players helped inspire his improvement. Since joining North Oaks in 2011, Eric has played regularly with a group of 16 to 24 members who show up every Saturday morning, put balls in a hat and pick their foursomes. They are all friends, mostly single-digit handicappers, and their friendly competition has an impact on his game.

"A rising tide lifts all boats," he says. "I wanted to get better and we have the tools to get better. It's the driving range. It's the practice areas. And it's the instruction that does it, as well as the people that you are playing with."

Speaking of the people, Erik says the golf is the entry point, but the members are what he likes so much about North Oaks.

"It has become the center of our social circle," he says. He plays in the Tuesday league, his wife Janelle plays in the Wednesday league, they play in couples events, and they have many friends at the club. They even bought a winter home in Arizona that's near other North Oaks members. "The things we do socially have shifted dramatically to be tied to the membership and North Oaks," he says. "It's been a great experience from that perspective."

And there's one more club-related thing that might have inspired Erik to work on his handicap.

"The last two years, we've got 16 guys to go to Arizona for a golf trip. [General Manager] Phil Anderson and [Head Pro] Ray Vennewitz have gone with that group, and the highest handicap on the trip is a nine," he says. "So you better be good, or you're not going to win any money that weekend."

In other words, with his long drives and lower handicap, he might be driving for dough after all!