Fun Family Golf Games to Play on the Golf Course 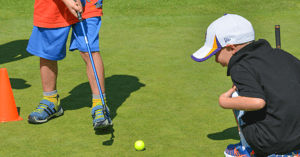 The family is gathered and they’re all looking for something to do together. A friendly and competitive round of golf is a great way to spend a beautiful Minnesota summer day outside. But not everyone plays at the same skill level. So, how do you make a competitive round of family golf fair and fun for everyone?

Certainly, the GHIN handicap system can help level the playing field, but only if everyone has a handicap index. There are, however, plenty of other enjoyable family-friendly games to play that will allow everyone to enjoy an afternoon of family golf. Take a look at these different games and try one for your next family outing.

Bingo Bango Bongo can be played with an odd or even number of players (two, three or four). In the game, three points are awarded on each hole for a bingo, a bango, and a bongo.

A bingo is awarded to the player who gets their ball onto the green first (players who are furthest out take the first shot, and so on, which can reward the players with higher handicaps). The player whose ball is closest to the pin after each player is on the green wins the bango for that hole. And a bongo goes to the player who holes out first.

A game known as Captain, Wolf or Lone Wolf is great for a group of varied skill levels. The captain on each hole (which rotates) hits his or her tee ball and then watches the remaining three players hit their drives. The captain chooses a teammate, but once another player hits their drive, the opportunity to choose the previous player and their drive is lost. When the captain picks a teammate, it is a game of two players versus two in a five-point game — with incentives.

The five points are awarded for the following: the low player on the hole gets two points, low team gets one point, approach shot nearest to the hole gets a point, and any birdies on the hole get a point. The game includes incentives of points for chip-ins, putts of any length longer than the flagstick and “sandies” for getting up and down from a sand bunker.

The captain also has the opportunity to be a “lone wolf” and go it alone on a hole (one player versus three) if they really like their own drive. When playing for fun, try to make sure all players get to play together on one hole or another.

Ghost is a game of fourball better ball match play that is played with three actual golfers and one imaginary player, called the ghost. One player on each hole elects to play with the ghost, who pars every hole (it’s almost like playing with Ben Hogan). The ghost plays off a scratch handicap and gives strokes, accordingly. The game works best when the highest handicapper in the group plays with the ghost. Hopefully, this one doesn’t come back to haunt you.

The key to a fair and fun day of family golf is to keep things more friendly than competitive. Switch the teams around if the better golfers are dominating the play, for instance, and give everyone a shot at playing together. When everyone plays and has some success (even if they don’t always win the points), it is a great way to get them back on the course for another afternoon of family golf.