When most people think about North Oaks Golf Club, the first thing that comes to mind is the golf. But Scott and Stephanie Paul have a different reaction. They think about all the great experiences their young children are having.

Frankly, they also think about the golf, but with three kids under 7, they were too busy to play much golf this summer, so they decided to start with a social membership. “We’ll probably look into a golf membership next year,” Stephanie explains, "but this was such a good decision for us and the boys and the whole family. All the activities have been wonderful for the kids, so it's just been great."

In fact, in their first half-year as members, the family has already discovered a number of must-do kids activities, turned the club into an extra place for family fun, and oldest son Archie even found the hidden prize at the club's annual winter medallion hunt – which he traded in for an epic Nerf Wars birthday party. "The boys just love it," Stephanie says, "and they haven't even gotten to go to the Halloween party or Christmas events yet." 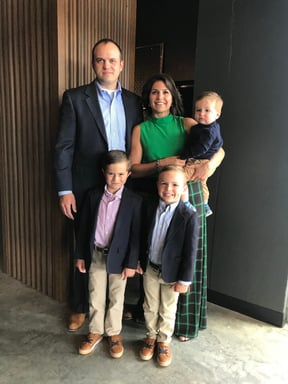 Scott and Stephanie joined North Oaks Golf Club last January. They' had considered becoming members ever since moving to North Oaks about six years ago, but always felt raising small kids kept them too busy for a golf membership to make sense. Yet the kids were actually the reason they decided to sign up for the social membership this year. Stephanie says they were simply looking for a good place to spend time with Archie (now 7), Louie, (now 5), and baby Gino (now 15 months).

"It was the middle of winter, and there are not many great places to eat near us," Stephanie says. "We live less than a mile away, and thought it would just be really nice to have another place to go that's really close and that has good food."

What they found was a club with more kids activities than they ever imagined, including Nerf Wars nights, visits by a penguin and raptors, and the medallion hunt (more on that later).

"All of the activities have been so great," she says. "They just love them. Every time we leave the club they are so excited and talking about all the fun things that they got to do and the cool things they got to see."

In fact, they often take Archie and Louie to activities at the club and then spend some extra bonding time with baby Gino.

And then there are the social benefits of their social membership.

"It's a great way for all of us in our family to socialize with other young families," Stephanie says. "We'll be at the club and the kids will know people, and that's kind of a fun way for us to meet other parents while the kids meet other kids."

In fact, Archie even learned how to socialize, at a kids event called Manners Matter. "It's a two-part series where they taught them how to introduce themselves to someone else on the first day, and then the second part was how to set a table, how to know what all of the silverware is for," Stephanie says. "So there is a whole range of activities for the kids."

Despite enjoying all the non-golf activities, golf is never too far from the Paul family's thoughts. "I think we'll be golf members someday," Stephanie says, predicting they will probably take advantage of the club's trial membership for social members this spring. "But we were just too busy this summer."

Archie took golf lessons this spring and had a lot of fun, according to his mom. "That was another great way for him to try something new and go meet up with some of his little buddies at the club."

And Scott still got out on the course a few times.

"He just played in the Acorn (club tournament) with another member," Stephanie notes. "He has been able to go a few times with other members, which is great, but that's all he really has time for right now.  So it's been kind of a perfect opportunity for him." 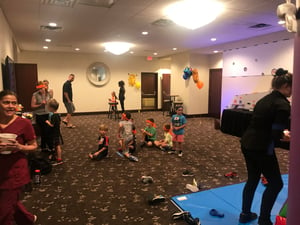 Still, the highlight of the year was Archie's Nerf Wars birthday party – and the medallion hunt where he won it.

"There were massive snow drifts all over the golf course," Stephanie explains, remembering her first exposure to the club's annual winter medallion hunt. "We had the baby in a carrier and a sled to pull one of the boys because they also had a sledding event." But after wading through the snow for the first few clues, Stephanie went back to the clubhouse with Louie and Gino while Scott and Archie kept looking for the medallion out on the snow-covered golf course.

"At one point, Scott thought he found the medallion so he told Archie to check behind a plaque." It took him a second, but he found it taped to the back of the plaque. "He was excited," Stephanie says, "but didn't quite understand what it really meant."

Back in the clubhouse, Stephanie was probably more excited than her son. "They kept announcing the clues, and then they announced Archie found it, so I knew before they ever got back to us. It was pretty fun!"

Since both kids and adults participate in the hunt, the winner had a choice of three prizes: a special dinner for two in the wine tasting room, a round of golf for four, or the Nerf Wars party. No matter how much Scott and Stephanie would have enjoyed the dinner or the golf, the answer was obvious.

They redeemed the Nerf Wars party recently for Archie's 7th birthday party. "They did such a great job," Stephanie says. "Archie is really into Pokemon, so it had a little Pokemon flair."

In fact, catering coordinator Krista Dordal made sure it was everything a 7-year-old would ever want. 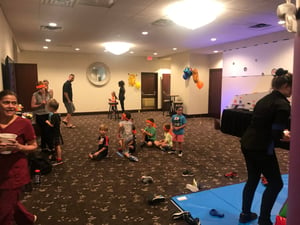 "She's just so organized, I felt like I was planning a little mini-wedding or something. She was just so thoughtful and had all these little details," Stephanie says."It's a little kid's birthday party, but she made it so special."

Archie and his friends loved every minute of it. The setup included the obstacles for kids to hide behind that they use at the club's other Nerf Wars events that Archie loves, but the party was personalized for him.

"We walked in and they had a Nerf Wars target on the TV with a Pokemon scene, Archie's name was up on the board, and it was just really fun," Stephanie says.  "They also had a little bounce house, and it was just so much fun. His friends really loved it and everybody had such a great time."