Golf Season Jump-Start: Tips From Our Pro to Get Your Game Up to Par 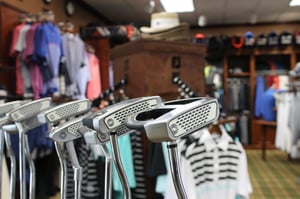 It takes more than an April snowstorm to keep Minnesotans from thinking about golf once the Masters gets underway. That's the "mental" start of Minnesota golf season, no matter what the actual weather looks like. So, if the sight of azaleas, dogwoods and Amen Corner have you thinking about polishing your clubs and getting yourself ready for the golf season, we have some tips to jump-start your game.

Jump-Start Drills for Your Driver, Irons, and Putting

"When people haven't swung for a while, it's contact that suffers most," says North Oaks Director of Instruction Grant Shafranski. That's why he suggests starting with simple drills focused on striking the ball solidly, whether with your irons, driver, or putter.

To improve iron strikes, Grant's suggests using the penny drill. "You put a penny about 4 inches in front of the ball and then hit your iron," he says. "The goal is to hit the ball cleanly and send the penny flying so far you can't find it anymore."

The drill requires swinging down into the ball and taking a divot that continues through the spot the penny is on. "That works for both irons and wedges," Grant says, "to produce a negative attack angle and control the low point and the arc type of the swing."

The driver requires a different kind of swing and a different kind of drill. "I usually use an empty box-sleeve  of balls and put it about a grip-length ahead of the ball on the tee, with the goal being to hit the ball over the box," he explains. "You want to produce a positive attack angle (meaning the club is moving upward at contact), which creates the most consistent contact, increased carry distance, and potential distance in your drives."

The box drill doesn't give you an actual measurement of the attack angle on your drives, but Grant says it will help groove your swing for improved contact and increased distance.

If you haven't touched the putter in a long time, Grant suggests starting by checking your alignment. "I have a bit of a life hack for this one," he says. Rather than buying a putting mirror at a store, you can make one on your own. "Take an old CD or DVD, then flip it over because the backside is basically a mirror. Then use a Sharpie and a ruler to draw the alignment lines on it and then you've got your own kind of MacGyver training aid for putting."

Whether you make it or buy it, the way to use a putting mirror is to put the ball in the middle of it and then get your eyes directly over it. "Get the face aligned properly with where you are trying to start the ball, and then hit it online as well, so it's not only set up squarely at address but also at impact."

The mirror allows you to get your eyes directly over the golf ball, so you have the best view of the line of your putt. "It basically gives you a perfect setup, so you can really watch what's happening with your putts," he says. "I would generally use it with shorter, straighter putts, to really focus on alignment."

New Equipment to Jump-Start the Season

A new season also means a whole new generation of equipment in the Pro Shop. And according to North Oaks Head Pro Ray Vennewitz, that's all about technology. "People want to hit it farther," he says. "So what are these companies trying to do? They're trying to make drivers where people are picking up 5-, 6-, 7-, even 8-miles per hour in ball speed and picking up yardage because of that."

Ray says all four club lines he carries in the North Oaks pro shop have new drivers this year, and all have improved their ball speeds.

"If the ball speed is improving by 4-, 5-, or 6-miles per hour, that's going to translate into yardage," Ray explains. "And the numbers I'm seeing for Titleist are that people are hitting these new Titleist drivers 10-, 12-, 15-yards farther than the previous models."

Calloway's EPIC Flash drivers feature their new Jailbreak Technology. "It really stabilizes the face and makes the ball jump off the club," says Ray. "Behind the face, there are two bars that stabilize it, and the ball shoots off of there really nicely."

The Ping G410 driver features a moveable weight for custom shot shaping. The goal is to add more distance while maintaining forgiveness. "The G410 is going to be good for a lot of players," says Ray. "A lot of the mid-handicap and high-handicap players tend to do very well with the Pings."

Try Before You Buy

Since all of these technologies are improving ball speed and driving distance, picking the right club still comes down to personal preference. Ray suggests taking plenty of "test drives" to find a driver that feels right and fits your game.

Even the big box stores will let you swing demo clubs, but North Oaks members will get a more personal touch on May 2. Ray is setting up a Demo Day for members, with representatives from Ping, Callaway, TaylorMade, and Cobra available to test clubs and ask questions. He's also setting up fitting days for each of those companies for the following week.