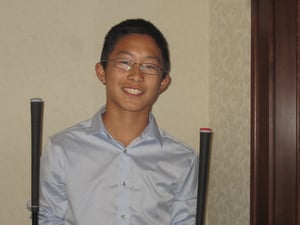 When Noah Xiong started working as a golf caddy at North Oaks Golf Club seven years ago, he never dreamed the part-time gig would land him a full-tuition and housing scholarship to the University of Minnesota — Minneapolis. But today, Noah is one of 60 Evans Scholars at the university earning a bachelor's degree debt free.

Noah is the eldest of four boys. Growing up, he loved spending time with his family at the lake and playing sports.

In first grade, Noah's father died in a tragic accident. In the aftermath, Noah's family became very close to their church community and pastor. "My dad passing brought me closer to my faith, he says. "I realized I needed to step up and be a role model for my brothers."

Noah started caddying the summer before eighth grade. During his orientation, staff briefly mentioned the Evans Scholarship, but Noah was only in middle school, so he didn't think much of it.

He loved his job as a caddy. "Growing up, it's a really good gig to make money," he says. "I've always been a golf guy. I really like the sport. There are some really good golfers to caddy for. And I like the relationships you build. You get to know the other caddies, head pros, and bag guys."

As Noah aged and looked forward to attending college, he knew it would be a financial strain on his mom, a single parent with three other boys to take care of. Yet, he still didn't think the Evans Scholarship was attainable. That is until his friend received the scholarship. "He went to my school," Noah thought.

"Wow, this thing is actually achievable."

What is the Evans Scholarship?

The Evans Scholarship was created by Chick Evans Jr., a famous golfer of the 1910s and 1920s. Evans wanted to provide an opportunity for excellent caddies to attend college. So, in 1929, he asked the Western Golf Association to take the fund he had established years earlier and create a scholarship. Two scholarships were awarded in its first year. Today, approximately 280 scholarships are awarded each year.

Evans Scholars must have excellent grades, outstanding character, a demonstrated financial need, and of course, a strong caddie record. If selected, Evans Scholars are required to attend certain universities depending on what state they reside in. The University of Minnesota — Minneapolis is the only school available to scholars in Minnesota.

After seeing his friend win the scholarship, Noah decided to apply. "I hit all those standards," he says. "And I wrote a pretty good essay." After being selected as a finalist, Noah went in for an interview. "I thought it would just be like eight directors," he says. "You go into the room, a big ballroom filled with like 100 people, and it's like press conference style." It may sound intimidating, but Noah said it went really well.

"They want you to succeed."

A few days later, Noah received the good news — he was one of 280 Evans Scholars. "It felt like a weight lifted off my shoulders and my family's shoulders," he says.

Noah immediately called his mom, who cried tears of joy when she heard the news. "It was a really exciting moment," he says. "It meant the world to me and my family."

But his mom wasn't the only person he called with the news. Noah also called Ray, our head pro, who had a big impact on him throughout the years. "Ray was super ecstatic," he says. "I owe so much to that course and those people. When I started caddying before eighth grade, he was always super encouraging. He has been super nice to me. He is one of the greatest guys I've ever met."

Steve Healy, one of our longtime members and a player Noah regularly caddied for the past three years, was also very influential to him. "He's a huge reason why I have the Evans Scholar," he says.

Life at the University of Minnesota

Noah is finishing his freshman year at the U of M and loving life. He lives with 60 fellow Evans Scholars in the Evans Scholar house near Dinkytown, and everyone is supportive and encouraging. "My first semester of college was eye-opening, to say the least," he wrote in a letter to the club and scholarship committee. "I will admit, I had some difficulty adjusting to the aggressive workload and big campus, but with the help of my new friends, the transition was made much easier."

Noah is studying mechanical engineering and hopes to minor in sports medicine or kinesiology. After college, his dream is to become a sports engineer and design equipment that will increase the safety of players. He is part of the U of M Honors Program, works part-time bussing dishes at a nearby sorority, works as an ice rink attendant at a nearby park in the winter, and enjoys working out, playing basketball, spikeball, and ultimate frisbee.

This summer, Noah plans to return to North Oaks Golf Club for one final season, travel, and spend lots of time on the lake.

"I am truly grateful for everything North Oaks Golf Club has given me," he wrote. "Never in a million years would I have thought that I could go to school for free. And for a kid raised by a single mom, with three younger brothers, it sets a pretty good example for something to strive for."