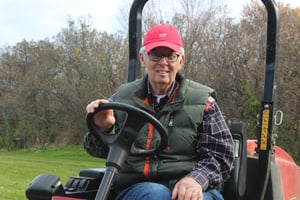 As the sun rises over the first green at North Oaks Golf Club, Joe Jesmer and his colleagues begin their day of lawn care and course maintenance. Joe, 76, is one of the club's many seasonal employees. He works on the grounds crew with about 25 others, only three of which are retirees. And he loves every minute of it.

In 1966, Joe and his wife Linda, now a retired interior designer, bought a home in North Oaks, the same year they were married. They've lived there ever since. Together, they have three children and six grandchildren. After moving into the neighborhood, the Jesmer’s quickly fell in love with the community and made many friends over the years. "You get to know people — neighbors, friends," he says.

Joe enjoyed a long sales career in the industrial supply industry, starting in college and ending up as a VP. He started working part-time for the locally-based industrial supply firm while attending St. Thomas College. When he graduated in 1965, he went full-time. "I was the company vice president and top producer for the firm for 30 plus years," he says. He retired from the same company almost 40 years later, at age 58.

Retired But Not Ready to Sit Still

Although he retired, Joe was not ready to sit still. "I was still an active person," he says. "I wanted something to do."

That's when Joe inquired about a part-time job at North Oaks Golf Club. North Oaks provided a nearby opportunity to be around people. "Being in sales all my life, I consider myself a people person," he says. And whether he's talking to colleagues or club members on the course, he has plenty of friendly conversations to fill his day.

During peak golf season, those on the grounds crew start their shifts at 5:30 a.m. and typically wrap up around 1 p.m. Joe works three days a week from spring through the end of October, and he's typically responsible for mowing the rough — which takes two team members a little less than two days to complete — and sometimes fairways (another multi-day, multi-person job). Joe loves the opportunity to be outside and enjoys working alongside his colleagues. "It's the camaraderie with the crew that I like most about my job," he says. "I consider them my friends."

And he likes the management just as much. "The management of the golf club, from the general manager on down, are very cordial, easy to work for, and provide a warm and welcoming environment," he says.

Once the course closes for the season and the greens are covered, Joe begins his other part-time job at a nearby funeral home, where he works as a funeral director's assistant. The key for Joe is staying active and engaged with others year-round. And he doesn't plan to stop any time soon. "I have no immediate plans to retire," he says. "I'd say my North Oaks Golf Club role is an excellent job. If you enjoy being outside and a certain amount of activity, it gives you a little purpose."