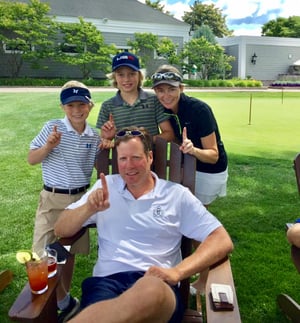 If you happened to see two young boys hitting golf balls at the driving range or practicing at the putting green this summer at North Oaks Golf Club, chances are it was 12-year-old Christian Goralski and his 10-year-old brother Ryan. "It's just kind of fun to bike up there," Ryan says. "We don't live far from the course. And it's easier than waiting for my parents to get home."

How much time did they spend at the course? The boys played in the junior league on Wednesdays, received lessons on Fridays, hit the course a couple times with their parents or friends on the weekends, and biked to the course to practice other nights of the week, too.

It may seem like a lot, but for two boys who have been golfing since they were toddlers, it's a whole lot of fun. The Goralski family is one of many that take full advantage of our golf membership for every member of the family. Here's their story.

Learning How to Golf

Since Chris and Kate Goralski are avid golfers, it was only a matter of time before sons Christian and Ryan learned the game. Christian started swinging a club around 18-months-old after his grandfather gave him a little plastic souvenir club. At age 4, after years of practicing at home, he played his first golf course. Ryan started playing in his backyard with his parents and brother. He, too, played his first course at age 4.

From there, the boys' love for golf blossomed.

Chris and Kate have lived in North Oaks for seven years and they joined North Oaks Golf Club in 2012. "After moving to the neighborhood, we drove by it every day," Kate says. "My husband and I have always loved to golf, and a year or two after we moved to the neighborhood, there was a promotion to get new members that we could not turn down."

Programs for the Whole Family

It was the first time the Goralskis joined a golf club, and they quickly got involved in leagues and activities. Chris plays in the Tuesday night men's league, the Saturday morning group, and often has standing tee times on Sundays with his golf buddies. He also participates in the ACORN Men's Invitational, season opener, Ryder Cup, and others.

Kate plays in the 18-hole women's league and women's city league, which travels to other golf courses, and participates in a breast cancer fundraising tournament hosted by some of the members. She also invites two former golf friends to play with her when the club hosts guest days. Together, they play in the couples twilight, which is more of a social time to meet other couples, play nine holes, and enjoy dinner.

Aside from the junior league, lessons, and recreational play, they also play in the Jr. Club Championship every year, which each of them has won twice.

A Safe and Friendly Environment

Christian and Ryan love having the freedom to bike to the nearby course on beautiful summer days, and their parents had a little hesitation when the idea first came up. "The only reservation I have is that I want to be sure they are always well-behaved, so I am always checking in with golf staff to be sure that the staff is also OK with the boys up there practicing on their own," Kate says.

So far, there seems to be no problem with the boys practicing. "The staff has told me that they love to see the boys and they are really in favor of promoting the game," she says. The boys have even been known to get a tip or two from General Manager Phil Anderson while practicing.

Favorite and Most Challenging Holes

Christian and Ryan have played North Oaks' course so many times, they even have favorite and most challenging holes that stick out to them. For Christian, holes No. 10, 11, and 18 are his favorite. "They're just fun holes," he says. "I like Hole No. 18 because it's hard, but it's fun to play. You either do really good or really bad." And the two holes he finds to be the most challenging are holes No. 2 and 18.

Coincidentally, Ryan's choices weren't far from his older brother's. "I really like Hole No. 10," he says. "I'm pretty sure I got my first birdie at North Oaks on that hole. Hole No. 18 is challenging and it's fun. You see how far you can hit the ball up the hill." When it comes to most challenging holes, Ryan says holes No. 2 and 14 can be a struggle for him.

The Best Part About Being a Member

The Goralskis are happy they made the decision to join North Oaks Golf Club because it's a great way to spend time outdoors as a family and it has really connected them to people in the community.

"We have met some of our closest friends since moving to North Oaks from being members at the golf club," Kate says. "We feel very lucky to be so close to such a beautiful course and clubhouse. We try and always remind ourselves that this is a luxury that we are fortunate to have. There are not many spots that we would rather be for dinner in the summer than up on the patio with a view of the 18th hole and the sunset.