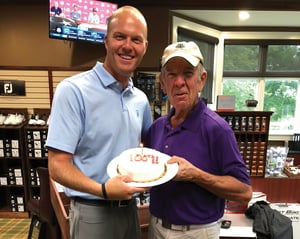 If you spent any significant amount of time around North Oaks Golf Course this season, you likely crossed paths with Mike Lamey. You see, Mike has become a household name at the golf club. So, if you didn't play with him this year, chances are you heard about him. Mike started this season with a goal to play 150 rounds before the course closed for the year. So far, he's on pace to accomplish that goal. (Update: Mike exceeded his goal with 152 rounds so far and more days of golf still ahead in the 2018 season.)

So why would a guy set such a goal? We were curious to know more about Mike's motivation, and once we learned his story, we had to share it.

When 77-year-old Mike hit the tee box last season, he hadn't golfed in years. For the past 15 years, he cared for his beloved wife Colleen, who lived with Parkinson's. The two were married 47 years. Together they adopted two kids and have seven grandkids ranging from two to 23 years old. "She was the love of my life," he says as he begins to cry. When Colleen died last spring, there was a giant void in Mike's life.

As Colleen's primary caretaker, he spent most of his time at home. Over the course of her illness, Mike fell out of shape. "Everything else was put on hold, especially the last couple of years when I had to be there all the time," he says. "I decided I had to do something."

Formerly a golfer and member at Midland Hills Country Club in St. Paul, where he once played 123 rounds in one season, Mike decided to get back out on the course. Only this time, he decided to join North Oaks Golf Club. He's lived just minutes away from the club since 1984, but family took priority when he met Colleen.

During his trial membership last year, Mike played 99 rounds before the course closed on Oct. 31. A new golf membership was his way to get back in shape, socialize, and stay busy. "When I first started last year, I could only walk six holes before I needed a cart," he says.

Slowly but surely, he was able to walk the entire 18-hole course. He also joined Medifast, hoping to shed some of the weight he had gained over the years. And it worked! After a little more than a year, Mike lost 90 pounds. He attributes much of his success to walking the 6.5-mile course nearly every day.

Striving Toward a Goal

This year, he started earlier. Maybe too early, some would say. On April 17, the day after 20 inches of snow blanketed much of the Twin Cities, he strapped on his boots — albeit still wearing shorts — ditched a few clubs for a shovel, and headed for the tee box... or what he guessed was the approximate location of the tee box. He packed down a small pile of snow to make a tee and hit a bright orange ball out into the white powder. He only played one hole that day and jokes that he barely made it back to the clubhouse alive. But it was a start. "It was probably the dumbest thing I've ever done," he says. "My boots were full of snow. I could hardly walk. I didn't know if I was going to make it. But I actually hit the ball pretty good."

On Sept. 4, Mike played his 100th round of the season with his cousin Pat, who also joined North Oaks Golf Club last year. The two play together 3-4 times per week. "It was pouring down rain," Mike recalls. But once they finished the round, North Oaks Golf Club staff had a cake waiting for him to commemorate his 100th round. Pat's wife even made him a t-shirt in honor of the milestone. Following his 100th round, Mike ordered a pizza with everything on it from Pezzo. "It was my first pizza in a year and a half," he says. "I love pizza."

Improving His Handicap and Friendships

But Mike doesn't only play with his cousin. In fact, he's already played more than 120 rounds this season with more than 60 different people.

Whether it's his cousin Pat, his wife's cousin, some members he's met at the club, members he's never met before, North Oaks General Manager Phil Anderson, or Honor Caddy Ryan Gallagher, Mike loves meeting new people. "I meet some of the nicest people," he says. "I get to know them and their families. They're my extended family right now." Maybe his desire to meet new people stems from his previous 45-year career as a sports reporter for the St. Paul Pioneer Press and the old Minneapolis Star.

Although it's the company and good times that matter, playing well is important, too. When Mike returned to golf last year, his handicap was 36. "That's as bad as you can get!" he says. In the past two seasons, Mike's managed to lower his handicap to 18. "I haven't gotten much better, but I haven't gotten worse," he says.

For the Love of the Game

A few months ago, Mike was diagnosed with macular degeneration, a common eye condition among older adults that causes vision loss. "I can't see the golf ball in the air," he says. "I don't know where it's going. Probably 70% of the shots I don't see. I can see everything else, but I can't see the ball." While this makes golfing alone difficult, Mike usually manages pretty well. "Usually, I hit it pretty much down the middle," he says.

According to Mike, some people ask him why he plays if he can't see the ball. But it's not about how well he plays, it's about staying active, meeting new people, and doing what he enjoys. "Every day I go out on the course, it's a new experience," he says. It's more about having fun, whether you're playing well or not, and celebrating your partner's good fortune.

Mike is still on track to play 150 rounds this season, but nowadays, he has to bundle up before hitting the course. He hopes the weather will cooperate so he can reach his goal, although he won't be overly disappointed if he doesn't. It's just for fun, after all. And he plans to celebrate with another pizza.

And what does he do in the winter, after the course closes? Mike exercises either at the YMCA or Anytime Fitness, plays pickleball, and takes advantage of the indoor golf simulator at North Oaks. "I went to every session last winter, four days a week, for 13 straight weeks to hit balls for an hour," he says. Mike even took up yoga last year to increase his flexibility for golf.

When Mike decided to take up golf again, he chose to join North Oaks Golf Club which is minutes from his house. “I made the right decision,” he says. “It’s like a family there.”