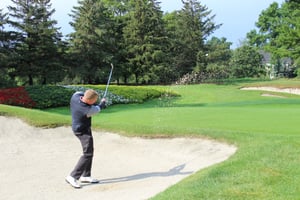 For many amateur players, hitting out of a bunker is cause for great consternation. While the pros consider escaping from a greenside bunker preferable to hitting from deep rough, the rest of us often hope to miss bunkers at all costs. It shouldn’t be that way. With some sound tips and a lot of practice, we should be able to hit the perfect bunker shot and have no fear of a trip to “the beach.”

It is important to remember that not all bunker shots are created equal. With varying types of sands, sand conditions, bunker shapes, slopes, and lips, you must always determine what conditions you are facing before making a swing. Sand saves are key to a good round, and failing to hit out of a bunker on the first try can sometimes lead to a bogey (or worse) and the beginning of a bad day. Here are a few tips that may help.

For purposes of this article, we are talking about greenside bunkers (hitting out of a fairway bunker is a different animal, striking even greater fear into the hearts of golfers). But the first order of business is choosing the right club. If you have a lot of green to work with between the bunker and hole, you can use a sand wedge (thus the name) at 56 degrees (or even a 52-degree gap wedge for a little longer ball flight). If you are short-sided, you may want to go with more loft — a 60-degree lob wedge — or open the face of the sand wedge even more to promote more height on your shot.

Dig Your Feet in 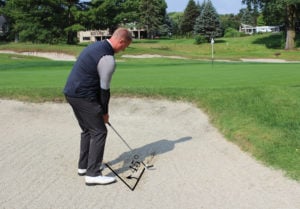 The next step is the setup, which starts with digging into the sand with your feet. This serves two purposes — a firm and stable base from which to swing and to test the sand for its condition (soft and fluffy, hard packed, or wet).

Generally, you want to play most bunker shots off your front foot to get the ball out of the bunker and onto the green. (If you have a longer shot to hit, move the ball back in your stance for lower trajectory shots that will run out.) Then, open your stance approximately 45-degrees. Open the club face so it is faces the target and not along the line of your feet.  Opening the club face allows the leading edge of the club to more easily slide under the ball and get it out of the bunker.

And remember to put most of your weight on your front foot to promote a steep descent toward the ball. You want to hit behind the ball and splash the sand, letting the sand carry the ball out of the bunker. 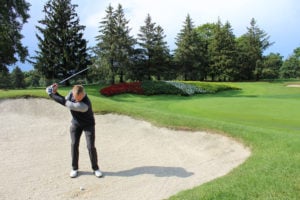 The swing should follow the line of your feet (outside-in path) and include a slight wrist hinge at the top of the swing arc. You may want to aim a bit to the right (for right-handed golfers) of your target as the outside-in path might cause the ball to go a bit left. You need to practice this swing to judge where the ball is going and how far it will travel. It takes a while to make this slightly different (and perhaps awkward) swing yours.

Finally, a follow through on the shot is important. The idea is to stay down longer than normal on bunker shots and keep your chest rotating to keep from digging in too deep in the sand. You must follow through on your steep swing or you might decelerate and chunk the shot, leaving the ball in the bunker and egg on your face.

The key to success in the sand is confidence, as any fear or indecision in a bunker can cause fat or thin shots and result in more time spent there. Confidence comes from practicing the shots, so get to the practice bunker — that’s where you want to spend your time in the sand. Apply these tips, and practice a bunker routine and start hitting perfect sand saves.