From Farm to Table: How North Oaks Golf Club Locally Sources its Produce 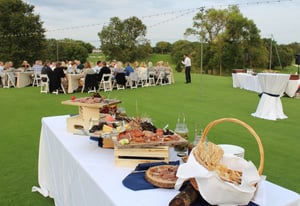 When Chef David Owen Jones joined the team at North Oaks Golf Club, he brought with him a passion for locally sourced food.

"It was something I've known for a long time," he says. "I worked on a dairy farm in college. I knew where our food came from. And I grew up in a household where we ate very seasonally."

He didn't understand why some restaurants weren't serving local foods that were at the peak of their season. "It's become a buzzword, but not everyone practices what they preach," he says.

After becoming head chef at North Oaks Golf Club six years ago, he pitched the idea of cooking with locally-grown produce to the board of directors, and the transition to local, fresh foods began. Since then, David has not only been able to grow fresh produce on-site, but he's maintained an ever-changing menu with locally sourced ingredients and enhanced the food quality, too.

It started with a small herb garden. A few herbs the first year and more each year following — chives, basil, parsley, oregano, thyme, mint. Then, they started growing vegetables.

Today, there are 8-9 different kinds of peppers, several types of tomatoes, potatoes, and radishes. "Last year, we pulled out 300 plus pounds of specialty potatoes," he says. "It's fun to create specials around those."

At times, people even reach out to David if they have a surplus of items. For example, someone once called David to tell him they had 800 pounds of apples available. And a butcher at a local grocery store mentioned he grew organic asparagus at home when he saw David in his chef coat. Now, much of the asparagus served at North Oaks Golf Club comes from that butcher's garden.

New, innovative dishes are always on the menu at North Oaks Golf Club. In the past, David changed half the menu weekly, adding seasonal delights when produce was at its peak.

Now that renovations are complete, the club has a wine room with its own menu and a regular dining menu for the restaurant. The wine room's menu changes every two weeks. Its freshly grown sides currently include grilled asparagus, potato puree, crispy brussels sprouts, and heirloom carrots.

"Here, we have to be mindful of our member base," he says. "People enjoy eating out of season, too." That's why half of the restaurant's menu stays the same.

Fresh and seasonal foods are growing in popularity throughout the golf club industry as club management hires talented chefs to lead the transition.

"I think the quality of food you're seeing in some of these clubs is really elevated," David says. "It's a different entity than a free-standing restaurant. The customers are basically the owners. The attention to detail and consistency is really important.”

"When people think of clubs, they think of staunchly meat and potatoes, but what people have wanted in their clubs are to have a relative dining experience. We want to give our members an experience like Spoon and Stable or Alma."