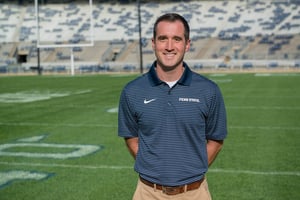 There’s something you should know about Josh Lemons. He gets things done. Whether it’s in his personal life or in his profession, when he sees the path forward, he’s on it.

“I’m a man of action,” Josh says confidently. The new North Oaks Golf Club Superintendent hit the ground running before he even had the job, surveying the course during the interview process. And now with the responsibility he’s always craved and an early spring, cleanup is well underway. Despite his eagerness, Josh confesses it’s challenging to start fast during these uncertain times with the COVID-19 pandemic. Still, he’s optimistic given the condition of the course: “The course came through perfectly, the greens are fantastic.”

Something else you should know about your new superintendent: He’s a nurturer who's devoted his life to helping things grow – plants and people. A native of Council Bluffs, Iowa, Josh grew up on a farm and was raised with an appreciation for all that comes from this green earth. His passion for the outdoors is what led him to his work as a greenskeeper at Minnesota Valley Country Club where he was hired on the spot by superintendent Mike Brower. On reflection, Josh says that job was less of a passion than an opportunity to work outdoors and save money after college so he could pursue his real passion: helping people.

“Helping people has been important to me," Josh says frankly. "It’s part of who I am."

Just eight months after they were married, Josh and his wife Ashlee answered a greater calling to work with disadvantaged and impoverished children in Mongolia for a year. While abroad, they were exposed to a life they had not known before: Supporting desperate families in need, they saw firsthand the effects of alcoholism on households already struggling under poverty. Josh and Ashlee knew there was more they could do.

Upon returning to the U.S., the young couple, now with two babies, were drawn to Betel UK, a non-profit organization in the United Kingdom that serves people struggling with addiction. As volunteers, Josh and Ashlee were able to support real change in the lives, homes and communities served by the organization.

“It was a meager existence, but it was so rewarding,” Josh reflects. “Our children got to see a different way of life. They’ve seen poverty, they’ve seen pain and they’ve seen success, as well. I believe it’s been a great thing for our kids.”

Interestingly, working with Betel led the Lemonses to Philadelphia where the non-profit organization had additional offices. As Josh began to transition from his role, it was Ashlee who recognized her husband’s love for agronomy and the outdoors. She suggested he get his Certificate in Turfgrass Managementfrom Penn State University. The “man of action” was locked in once again. Josh took on leadership roles in the program, secured internships at historic Merion Golf Club and the Donald Ross designed course at Aronimink Golf Club. Josh finished at the top of his class and was off and running. Again.

“I always wanted to be from Minnesota,” said the native Iowan. Lucky for him, he was a Minnesotan by marriage, with his bride hailing from Grand Rapids. And upon graduating from Penn State, Lemons family, now with 4 children, packed their bags and headed to Minnesota.

Josh had secured a position at Golden Valley Country Club before leaving Pennsylvania in spring of 2017, where he worked under the mentorship of Superintendent Jeff Ische. With a growing desire to take on more leadership responsibilities, Josh accepted the 1st Assistant Superintendent position at Olympic Hills Golf Club, working for Jake Schmitz.

And now, Josh Lemons is in the role he’s always wanted at a club with a membership that is invested in the health of their golf course and who strive for the best. Without question, he recognizes the challenges that lay ahead: he's gearing up to tackle the replacement of Brian Boll, a respected superintendent for years at North Oaks, and the transition to bent grass greens.

Josh is also zeroed in on the remaining steps to elevate North Oaks to an ACSP for Golf Certification from Audubon International, which would complement North Oaks's commitment to minimizing the environmental impact of golf. Expectations are high for the new superintendent, but none higher than those he has imposed on himself – and he's wasting no time living up to them. The “man of action” is already on the move.